My Little Snippet on Stuart Wilde 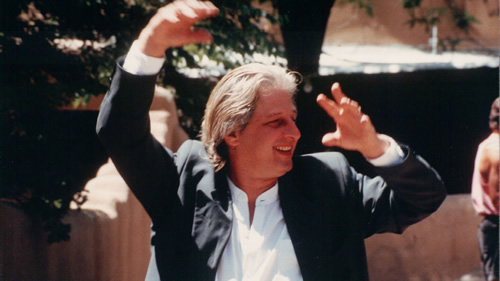 I believe Stuart Wilde to be one of the great teachers of this era – this important and extraordinary era of human evolution and creativity. We are now at a cusp; a point of great change and Stuart these past several decades has had an obscure but far-reaching and profound role in guiding people through these times.

I first met Stuart back in the 80’s when I began working for a publishing company he owned in Australia. A particular moment that stands out for me occurred when I was helping out at a seminar of his in Sydney. I arrived in the city via cab from the airport and Stuart greeted me and insisted that he carry my bag from the cab to our apartment hotel. Respect. It was a simple gesture that has stayed with me – we were equals – no status, no layers to sift through, no bollox.

Stuart Wilde has always been on the leading edge of metaphysical thought with his remarkable ability to voice ideas and put pen to paper through his lectures, books and music lyrics. Stuart Wilde lives on and around the fringes of this world, creating a lot of controversy with his unusual teachings. Over the years I have been involved in creating and selling products for Stuart and have heard it all – from people who laud him as a great teacher to less endearing comments.

His philosophy is imbued with the Tao (see my previous blog). To try to explain Stuart’s teachings is a bit like explaining the Tao – it is unknowable and inexplicable. His teachings and musical creations are like a canvas of a magical work of art. Everybody has an opinion on his art but those who love it get a great deal out of it. Stuart has inspired millions and upset many self important souls. People of a high minded intellectual stance need not apply – this is not what it’s about. What Stuart may lack in detail he makes up for in inspiration. I have been amazed and totally in awe of his humanness, his perspicacity, his heartfelt appreciation, his courage to make things happen in seemingly impossible circumstances and of course his infectious humor. Putting the mind aside for a moment through meditation and reflection and watching your feelings is fundamental to his philosophy – the opposite of what we are mostly taught.

So just what is it about the teachers anyway? Many years ago over a period of ten years or so I met and gathered with many a guru and for the most part I think it is best to stay away from them. They are mostly fakes; dumping their saccharine, syrupy ramblings onto anyone who will listen. They indulge in creating a false persona of spiritual cleanliness but they are distant from the real world of the people for which they hold a secret disdain. There are few exceptions to this in the traveling circuit of big seminar gurus. One is Stuart Wilde. To me he is as genuine as any person could be and it shows up in his teachings and the way he gets involved with people. Here is a story of just one example of countless many I experienced. Stuart created a seminar called the Warriors Wisdom in Taos, New Mexico, USA and a particular process conducted in the forest was called “The Wall”. The objective was for the one hundred or so participants to get over a high and flat surfaced wooden built wall without the use of anything but human bodies and a bit of thought and imagination. An exercise in working together. Often all the staff would get involved, including Stuart, and I remember one quite painful but hilarious time when Stuart and I were side by side on the ground on our hands and knees with a pyramid of people above us and others clambering over them to get over this ridiculous wall. Stuart Wilde, lecturer, celebrated author and creator of the seminar was on the bottom of the pile. We were crying out in pain from the weight of many bodies but also laughing at the sheer indulgence of it all and the created camaraderie.

Glynn Braddy, an Australian, was another lecturer who was particularly brilliant and of course controversial (almost all the greats are). Some considered him a metaphysical genius with his ability to combine science, nutrition, philosophy and metaphysics in his teachings. His mind traveled over a vast landscape. I use the past tense because I don’t think he teaches anymore but I attended a few of his workshops and they were in a league of their own. I use the information I learnt from Glynn on a daily basis. (Glynn never wrote anything down so you won’t find any books out there). Another teacher I liked (but had nothing to do with – I only read a few of his books) was Osho – controversial, wild and on the edge. He challenged you and got you thinking about the world and your place in it – how different it truly is from all the hoopla and nonsense.

Interestingly a great teacher I dearly admire is (go figure) David Attenborough, appealing to my naturalist side – all that is calm and secure and detached. The man is a beacon of cerebral confidence and a strangely sobering reminder of the corporeal – a more earthy, less metaphysical understanding. A good balance maybe. Interestingly Attenborough was criticized by many for taking sides in the conservation debate. It seems no matter who you are and how respected you can be there will always be the cynics. And I guess why not? We need a little bit of that to keep everyone on their toes.

So this brings me back to Stuart. Why do I like his teachings so much? I wouldn’t be giving them any energy if I didn’t believe in them – it’s not my way. Many things I don’t agree with but of course one must absorb it all in context. Admittedly I don’t understand his teachings of the last decade as much as I would like, where he seems to have gone right out on a limb, but the underlying beautiful teachings of the Tao are still there. Every time you access them you get something new. It’s like you have never heard it before or it’s a reminder of something profound, something magical. Infused with potential. Overflowing with possibility and hope. You can listen to or read something of his again after many years and it is perfect for something that you need. It may be just one little idea or feeling that will resonate for the week or month. And that is the beauty here. It’s not about analyzing things too much, about being right. It’s about the inspiration and insight into your own truth. It’s about the feelings that drive you to keep your energy moving and on your path. It’s about keeping your humanity close to your heart. Sometimes life can be overly challenging. The intellectually driven world often lacks hope and faith – an overall guiding principle of love; a connection to our humanity. Things that are sadly needed in our world.

Here is a little adage that seems poignant just now – “Just beyond our earthly grace, behold that ever shining place”.

PS: Stuart is not aware I am writing this. This is the first time I have ever written about him. And we are not related – I lack the ‘e’ from my last name.